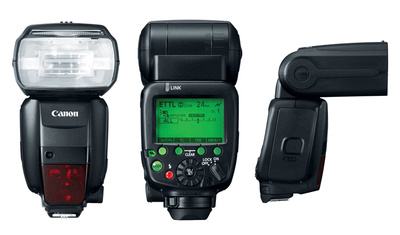 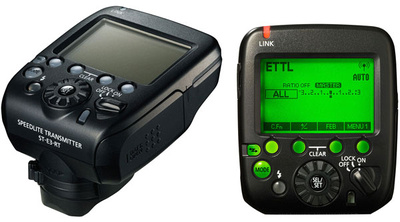 I purchased the new flash for my recent event but I did not buy the transmitter. I used the new flash on my TT5 pocket wizard. I had the flash off camera and was controlling the flash with the miniTT1 and the AC3 controller on camera. For the most part it functioned well but I remember there being a few miss fires which is one of the canon flash issues when using the Pocket Wizards. This is why they supply the little body bag (what I call it) for the flash unit when it sits on a TT5 Pocket Wizard.
A few days after the shoot I was culling my images and discovered that I had missed more than a few moments because of misfires. (I have my camera set on one shot to give the flash some cycle time.) I decided to upgrade and ordered the new canon controller ST-E3-RT. I received it yesterday (Jan, 31st) and began testing and using it immediately.  Below is a quick synopsis of my findings.

My short findings: (The good stuff)
The controller works really well with the new flash system and the controls are exactly the same as on the flash. Very long range..
It allows you to power down the flash when on manual, down to 1/128th of second. The Pocket Wizards only powers down to 1/64th.

BONUS: I found that if you place the new Canon controller on top of the miniTT1 it will act as a AC3 controller and control your new flash plus the your old flashes on the TT5 pocket wizards at the same time.  Interesting........

It's a little bulky on top on the camera with the miniTT1 and the new Canon controller but just wanted to mention that it worked. You can control each flash independently of each other in manual mode.

I hope Canon comes out with a TT5 type of receiver for the older flashes to make them compatible with the new system. Those will sell like hot cakes!

Hope this helps and thanks for stopping by, Rick.

Framedelegance Photography
Hi Arthur and thanks for your question. As it stands the pocket wizards will not trigger the Canon 600EX-RT Flash unless the flash is on a pocket wizard. The frequencies are on different channels and it appears that Canon is not going to divulge that information. in my quest to find this information i began testing different scenarios because I owned two 580ex II flashes and the TT5, TT1 mini and the AC3 pocket wizard transmitters. I started transitioning to the new canon flashes and started out by buying one flash. I quickly found that I could not control the flash with the wizards so I bought the canon st-e3-rt transmitter.

I started trying different scenarios until i found that if I placed the pocket wizard tt1 mini atop my camera in the hotshoe and placed the canon st-e3 rt transmitter on the tt1 mini, the canon transmitter became the same type of equipment as the ac3 controller atop the tt1 mini. By doing this it actually controlled not only the 580's on the tt5 pocket wizards but it also controlled the new canon 600 flash. I was able to independently control the three flashes manually or TTL.

Hope that helps. If you have any other questions don't hesitate to ask.


Arthur(non-registered)
Thanks for the review.

Can you elaborate on the combined use of the tt1 and the st-e3-rt remote attop the camera to control both the old 580's and new 600's? Thx!

Rick Garcia, Wedding and Portrait Photographer based in the Riverdale area of the Bronx, New York serving all 5 boroughs and the adjoining counties.